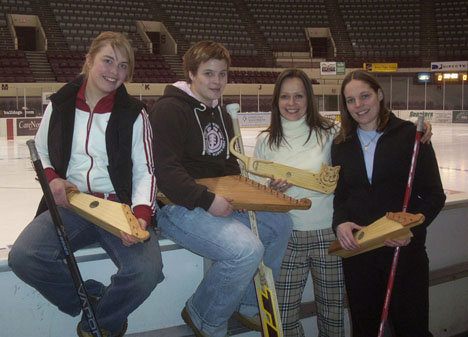 Since the 1980’s kanteles have been the first instrument many students in Finland have learned to play - including UMD hockey coach Mimmu Turunen, and three Finnish players on the 2004-2005 team. Prior to a big weekend of hockey against their favorite rival - the Minnesota Gophers - the four Finns gathered iceside for this photo with kanteles from The Kantele Shop, and their hockey sticks. (Mimmu is holding her "katele".)

Suvi will be returning to UMD for two more years of study and hockey. Nora Tallus is graduating this year after playing for the Bulldogs the last four years. In 2003 she scored the winning goal against Harvard in the 2nd overtime to clinch the NCAA championship for UMD. Nora will probably be playing for the Finnish national team in its quest for world and olympic titles in the future. Mimmu will be returning as an assistant coach.

During the photo shoot at the ice rink, Suvi, Ah-Koo, and Nora indicated an interest in playing kantele again. As a result of their interest, a few weeks later they were presented with special kanteles from The Kantele Shop (see below): 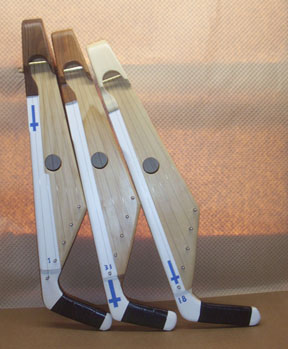 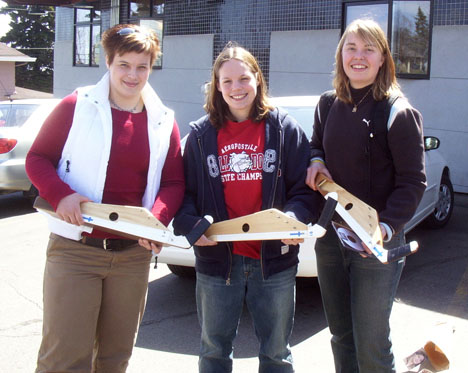 For more about the team go to their webpage: http://www.umdbulldogs.com/womens/hockey/

Back to The Kantele Shop main page